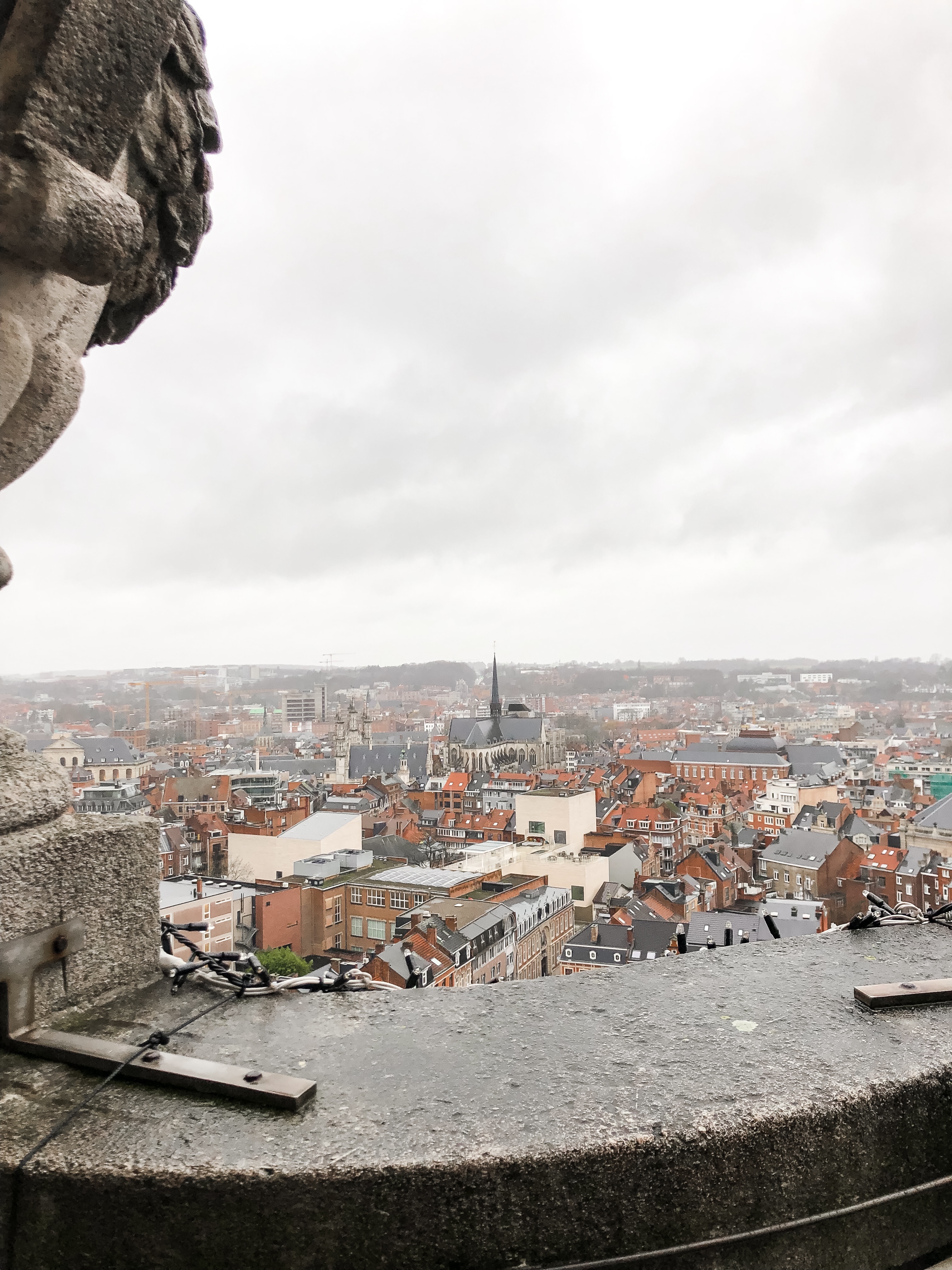 Leuven (or Louvain in French) is the capital of Flemish Brabant in Belgium.  It’s only a 20 minute train ride from Brussels, which makes it perfect for a day trip. If you have a love of learning, history, art, architecture, or food and drink than you will enjoy exploring this lovely city!  Here are my suggestions when visiting Leuven.

It’s a very easy to take the train from Brussels to Leuven. We hopped on a train from Brussels Centraal Station to Leuven and were there in a quick 20 minutes. Trains to Leuven left this station about every 10-15 minutes. If you are flying into Brussels Airport at Zaventem, you’ll find regular trains to Leuven and connections from other Brussels stations.  To check schedules this website is helpful, along with the Rome to Rio app. From Leuven station, it’s about a ten minute walk into the city center.

The Library was first established in 1425, but was destroyed by bombing during World War I. Whitney Warren, an American architect, designed the new University Library in a Flemish Renaissance style. It took seven years to build and was finished in 1928. The building was a gift from the American people to the city of Leuven and the KU Leuven. The University library was damaged again in 1940 during a World War II. Despite all of the safeguards put in place against bombs and fire the new library burnt down again. So crazy!

Today the once again rebuilt library holds a huge collection of French and Dutch publications. There is a reading room constructed entirely of wood within the building, and you can get a beautiful view over the city from the Library’s Belfry. I highly recommend going up to the Belfry, the view is amazing and you learn a lot of the history along the way up. For more info click here.

This Roman Catholic church was built in the 15th century in the Brabantine Gothic style. The church has a cruciform floor plan and a low bell tower that has never been completed. The towers were never completed due to unstable soil. The church with belfry was recognized as a UNESCO World Heritage site. The interior is quite impressive and so is the art collection. You can admire The Last Supper and The Martyrdom of Saint Erasmus by Flemish painter Dieric Bouts.

Right across the street from Sint Pieterskerk is the stunning Stadhuis. I would go so far to say it’s one of the highlights of Leuven, it’s that impressive. The Town Hall is a 15th century landmark building on the city’s Grote Markt.

The building is well preserved and surprisingly survived both World Wars with only some minor damages. It is famous for its ornate architecture with those lacey details. You see this style all over Belgium and it never ceases to impress. The building is decorated with hundreds of statues of local figures, biblical characters and saints. There was a wedding taking place while we ate lunch nearby, such a beautiful backdrop for a special day.

First a little history. The Beguines were a group of semi religious single women who lived within the beguinage community. Communities of beguines were established starting in the twelfth century. They brought like minded women together, who did not want to take monastic vows but wanted to live a life of piety and hard work. In 1311 it was decided to abolish the beguinage movement, but the Pope made a special exception for Flanders, where the beguinages survived.

The Groot Begijnhof was founded in 1234, and the last Beguine survived until 1988. At any one time, up to 350 women lived in 100 sandstone houses, surrounded by canals, squares and gardens. The entire site was sold to the university in 1962, and restored to make lodgings for students and professors.  This is one of the best preserved Beginages and another UNESCO World Heritage Site.

Have A Beer The Longest Bar In The World

So, this is a little misleading. It’s not actually one really long bar but a whole square of mostly bars. The Oude Markt allegedly has the longest line of consecutive bars, inns, and pubs in the world. Whether or not if that is true it’s a great place to have a cold beverage and people watch. (It was raining quite heavily when we visited so we didn’t stay for a drink, next time!) Speaking of beer, Leuven is also the home of Stella Artois. You are able to tour the brewery of you would like.

Fonske, or officially named Fons Sapientiae which is Latin for “the source of wisdom” will greet you right before you get to the Grote Markt. Fonske is pouring water or maybe beer from a mug into his open head as a metaphor for wisdom seeping into the brain. The statue was commissioned in 1975 in honor of the 550th anniversary of the KU Leuven and like Manneken Pis in Brussels he is sometimes dressed for an occasion.

Grab A Coffee At Mont Cafe

This is a super cute cafe that serves excellent coffee. The shop is quite small but there are a few stools to sit inside during inclement weather or you can take your coffee to go. As great as the coffee was we LOVED this cafe because they had a cat. His name is Monty (we have a Monte cat too) and he’s technically a street cat who spends his days n the shop lounging in his suitcase. So stinking cute!

The weather was not great while we explored the city. It was a bit chilly and raining off and on. I suggest you bring an umbrella when you visit, I guess rain is quite common. We had a great lunch at Resto Cafe Agora which was right in the Grote Markt. They had a great little terrace area with heaters and the staff were super friendly. We didn’t look into top places to eat in the area but The Culture Trip and Visit Leuven have some great info.

I hope you consider Leuven on your next visit to Belgium. It’s always nice to explore smaller cities, especially those so rich in history.

Subscribe to Blog via Email
Instagram
Leuven was such a quirky town, I loved our day trip there. 🪲This is Totem, a shiny green beetle impaled on a 75-feet high needle right outside the university library. It was designed by Jan Fabre and erected in 2004 to commemorate the 575 years of the Library. 🪲🇧🇪 ⁣It definitely caught me by surprise when we were walking through the square.
Winter in Maine is far from over and that means festivals! ❄❄❄ From hot cocoa and s'mores to ice sculptures and toboggan races, there's something for everyone. Sharing some upcoming fests on the blog today! 🔗 in profile.⁣
Sunday ⁣✨
Brussels 😍 ⁣
Trying to be more productive with my free time this year. I'm usually a lounge around after work type of gal but my goal is to be more productive during that time 😉Sharing some ideas on the blog today! 🔗 in profile.⁣
Another day another snap from Belgium 😍🇧🇪 ⁣