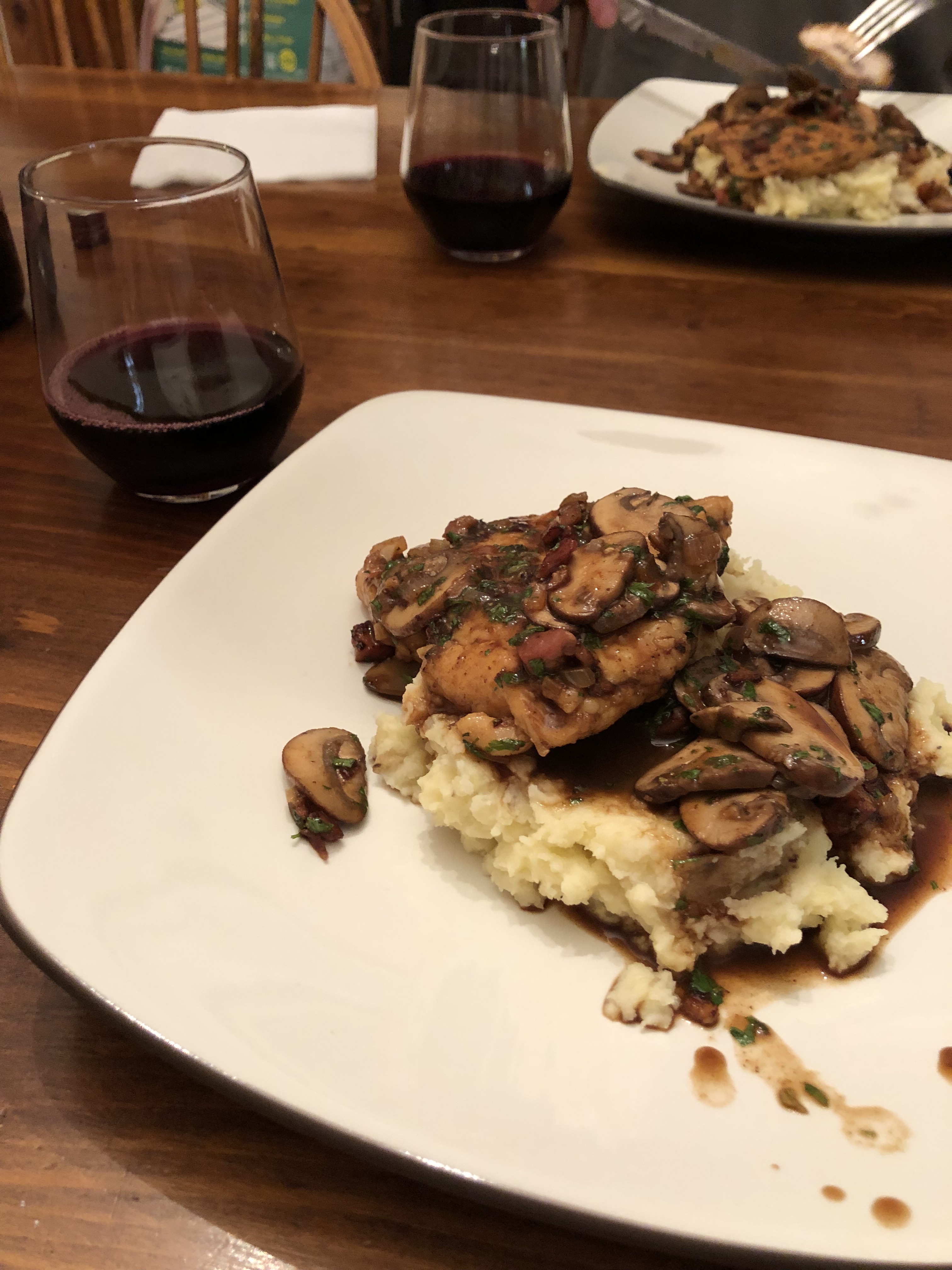 Another week in this new year has flown by! We’re coming up on a long weekend, thanks to Martin Luther King Jr, and it’s my turn to cook for our Sunday Supper. I’m trying to think of a country to use as a theme but I’m stuck. I’ve been looking through pinterest and nothing is jumping out at me,  I need to make a decision soon because Sunday is right around the corner!

Andrew made Chicken Marsala last week and it came out so good.

Chicken Marsala is one of those classic Italian dishes that you see on restaurant menus everywhere but probably rarely attempt making on your own at home. Andrew decided to tackle it and after looking at a few different recipes went with one from the magazine that I bought. I honestly was shocked because he’s mostly anti magazine recipes…maybe because they’ve been followed up with pizza delivery on more than one occasion. The only part of the recipe that seemed strange to him was the addition of gelatin, but all came together.

This recipe was a winner! When I think of Chicken Marsala I think of the sauce. It’s alllll about the sauce in this dish, which should be velvety (enter gelatin) and have the perfect balance of sweet and savory flavors. The sweet coming from the Marsala wine and the savory from Earthy porcini and cremini mushrooms. Sidenote about wine, never cook with a “cooking wine” if you wouldn’t drink it you probably shouldn’t be cooking with it. Marsala wine is great to have on hand and you can get a bottle in the $10 range that is decent.

I can see this dish being made again. We had three meals out of it and the whole house smelled so good while Andrew was cooking on Sunday. We had it over potatoes, but pasta or polenta would be yummy as well. Serve with a nice glass Red and an Italian playlist on Spotify.

Here is a link to the recipe that was in the magazine.

Now, does anyone have any supper ideas for me? 🙂

Like Loading...
chicken foodie Recipes sunday supper
Subscribe to Blog via Email
Instagram
New Post! 🎄 Sharing some Christmasy things to do around Portland on the blog today! 🔗 in profile! 🎅🎄❄⁣
What a weekend ❤️🎄😍 ⁣
Happy Friday! I love slow start mornings, just laying on the couch with Charlie wrapped in my black cat blanket. #catlady 😉 This week’s finds include some leftover ideas, a Christmas craft, a warming beverage, and some tips for shopping small. 🔗 in profile!⁣
I hope your Thanksgiving agenda was as wonderful as mine. (Agenda prepared by our niece and nephew 😊…so cute) ⁣
New post! Sharing some of my favorite breweries in the Portland area on the blog today. 🍻Cheers to a two day work week! 🔗 in profile!⁣
There’s just something about fresh, salty air 😍 ⁣