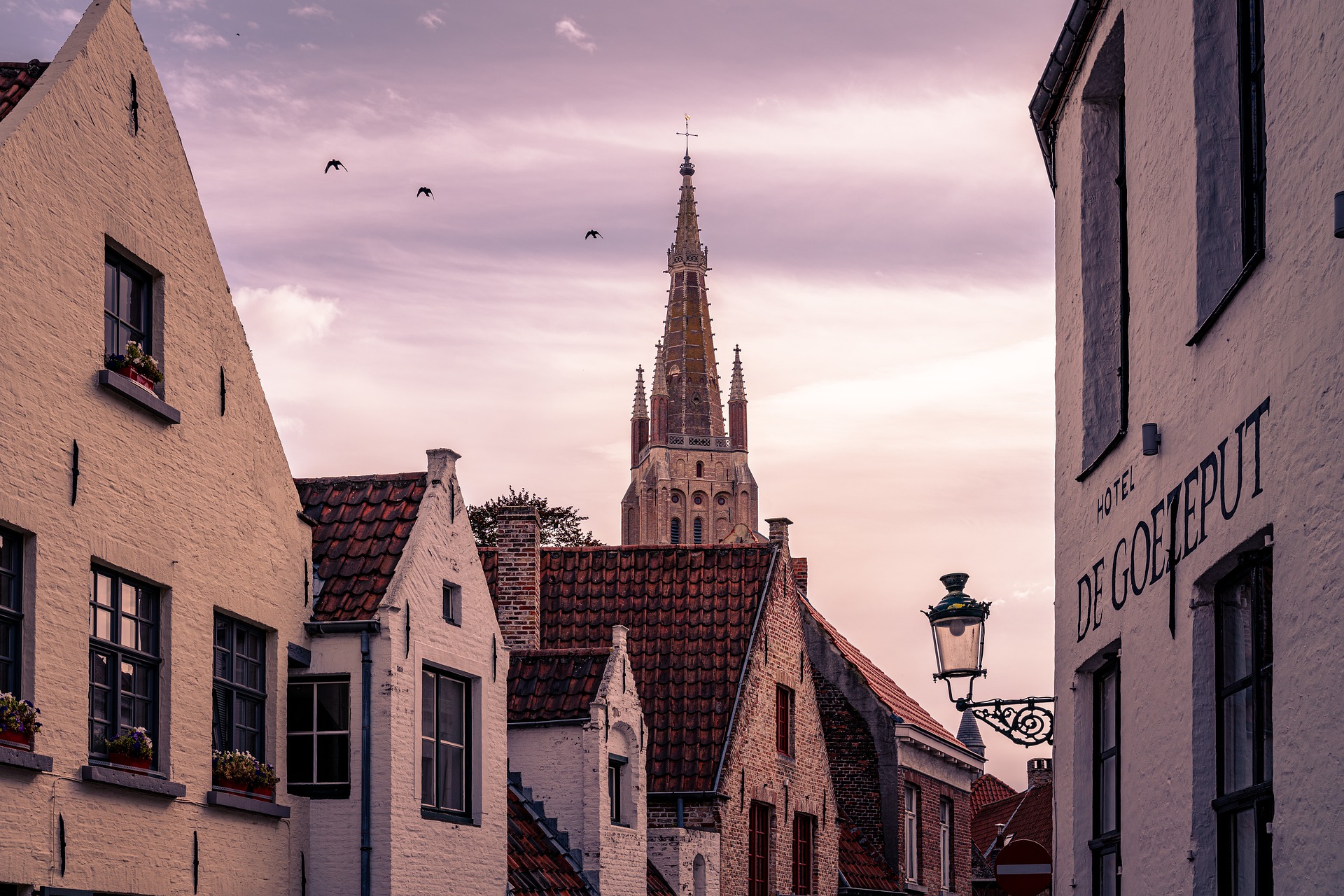 Belgium is a lovely country that’s often overlooked when planning a trip to Europe. It’s overshadowed by other top European destinations and I’m telling you right now that should change. We have visited Belgium multiple times in just a few years, we love it there! When my parents wanted to check out a Christmas Market we sent them to Belgium and they loved it there too. Why is Belgium so great? Well let me share some reasons why I think it’s a great place to visit.

[Disclaimer: With any travel right now due to COVID-19 restrictions be sure to check with local guidelines. Be safe out there!]

This small city is sometimes referred to as the Venice of the North due to its many canals. There are windy cobblestone streets that are dotted with cute houses and medieval architecture. One of the most picturesque views is probably the Rozenhoedkaai, you can see the Belfry tower in the background and there are beautiful hanging trees, possibly willows? I’m not sure but it’s lovely and the perfect backdrop for pictures. At night the Market Square is framed with colorful buildings and is quite pretty at night.

Ghent is known for its well preserved and restored medieval buildings, its many churches and beautiful canals. The medieval “Castle of the Counts” aka Graventeen is a must see. Some pretty gruesome things happened in this castle! Under medieval law people had to confess before they could be found guilty, so unsurprisingly torture played an important role. The gatehouse, ramparts, keep, and stables are open to visitors and the view from the top of the castle is really nice. Perfect for taking pictures! Sitting along the riverside at the Graslei, with a nice cold beer on a warm summer evening watching the boats float by is perfection.

This capital city is full of amazing food, quality beer, and beautiful buildings. The Grand Place is where all of the action is. The gilded buildings are beautiful during the day but at night they are magical. The whole square is aglow with soft lights and the energy is great. You’ll find people snapping pictures, eating a late night waffle and just hanging out. If you’re lucky you’ll catch some street performers too. Brussels also boasts the famous Manneken-Pis statue and cool comic murals.

If you’re a foodie like me, you’ll love Belgium. This country is known for sweet treats but it has so much more to offer! as Belgian Waffles and Chocolates but don’t forget about the frites! Belgians invented French fries or frites and you can find a frituur (often more than one) in every town. Mayonnaise is the traditional Another delicious savory dish is witlof, which is basically a cheesy ham and endive gratin.

Belgians invented French fries, don’t let the name fool you. A frituur can be found in every town and often you’ll more than one. Mayonnaise is the traditional condiment to have with your frites but ketchup is also popular. At many places you can make an order of frites your whole meal by topping them with a beef stew, more on that later

A classic Belgian dish that you can find at just about any café or brasserie in Belgium. It’s so simple, yet so good. The most common way mussels are served in Belgium is steamed in white wine and sometimes they throw some shallots, parsley, and butter in there too. The fries are perfect for sopping up the delicious broth that the mussels cook in.

I had this stew for the first time on top of frites. It was amazingly flavorful and I needed to have it even without the fries. Carbonnade à la flamande (French) or Stoofvlees (Flemish). This Flemish stew is made from beef slowly simmered in Belgian beer until it melts in your mouth. The sauce is thickened with a few slabs of bread, they add in some mustard, a bit of onion, and voila!

This is a surprisingly delicious dish that I now make at home. It’s endive wrapped in ham and then covered with a béchamel and cheese sauce. Sometimes it’s served with mashed potatoes on the side and it’s the perfect dinner. You think it would be heavy with the sauce but it’s not.

Belgian Waffles and Chocolates are enough reason to visit Belgium. Nothing tastes better than a crispy waffle covered with chocolate sauce and whipped cream, it tastes especially nice at night while standing in the middle of a lit up Grand Place.

Belgium is not lacking in the delicious beer department and it’s refreshing to not be surrounded by New England juicy IPAs. There are so many to choose from and visit but start with these:

Brasserie-Brouwerij Cantillon is a small traditional family brewery based in Anderlecht, Brussels. Cantillon was founded in 1900 and brews exclusively lambic beers. This is a mist stop for any beer geek, ,my husband wouldn’t stop grinning the entire time we were there. Be sure to take the tour, it’s worth the price and very interesting. Try the Gueuze, Gambrinus Rosé, or Nath. They are not open Sunday or Wednesday so plan accordingly.

This is a brewery that likes to experiment with new styles of beer and not just the traditional Belgian styles that you may think of. One of the first beers that they brewed they made by replacing 20% of the malt with unsold fresh bread. They like to keep things interesting. Some of my favorites are The Dark Sister, Wild Child, and Nord Bliss.

Brasserie de la Senne is a brewery named for the river Senne which flows through the city of Brussels. They brew some really fun beers and this Belgian brewery has even done a collaboration with a brewery in my home state of Maine. They are most known for the Taras Boulba, La Jambe-de-Bois, and Zinnebir. If you happen to be there in August look for Saison du Meyboom it’s a blond session and one of my favorites.

Try this this beer for it’s label and the cute glass it’s served in and then you’ll be hooked by the flavor. The Blond Chouffe and Cherry Chouffe are my favorites. They also have seasonal varieties like the N’ice Chouffe which is a winter style.

Belgium is a fairly small country so that makes it’s very easy to get around. With great train connections throughout the country it doesn’t take too long to get from one place to another. For example, you can get from Brussels to Ghent in under an hour, or hop over to Bruges in about an hour. Also, because of it’s location you can easily get to Amsterdam, Paris or London by train in just 2 to 3 hours. We took a bus to Lille from Bruges and were there in no time.

Belgium has a lot to offer for such a small country and there is still so much of it that I want to explore. The towns of Bouillon and Ypres are next on my list!

Subscribe to Blog via Email
Instagram
Maine Sundays ⁣✨
Do what brings you joy in 2022 ❤️ we usually take our tree down after the epiphany but I got really sick and we were still enjoying the coziness of the twinkle lights. So Andrew and I said screw it, we have a valentine tree 😂🥰 one of the perks of having a fake tree 😉 ⁣
Happy Friday! 😊 Sharing some more finds today on the blog. This week’s finds include an at home pedi kit, a pretty pink mocktail, a Frenchie newsletter, and a quick dinner idea. 🔗 in profile.⁣
Obsessed with this print that showed up today in my mailbox! 🎨 Check out CityPrintArt on Etsy! Her work is so pretty 😍 ⁣
One of my favorite things to do when I travel is eat. 🍽 Sharing some French favorites on the blog today. 🔗 in profile.⁣
Slow Sundays are the best on a cold morning. 🥶 It’s currently 6 degrees F outside and I am happy happy inside eating croissants🥐, drinking warm coffee ☕ and watching Archive 81 😉⁣