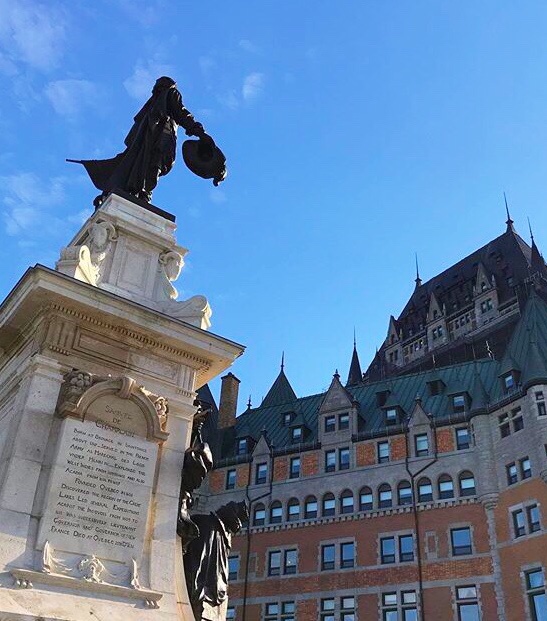 What a difference a year makes! This time last year it was my birthday weekend and we were driving back from Old Québéc City. Fast forward a year and we’re not even allowed in Canada due to Covid! Man oh man, I know I say this all the time but I miss traveling. Hopefully neighbors to the North will let us in soon so that we can get our French/Québécois food fix. We had a great little weekend there last year and here are some things you should check out when it’s safe to visit again.

This iconic building, perched up on the hill overlooking the city, is thought to be the most photographed hotel in the world. And for good reason!  It’s very castle like in appearance and definitely stands out in Québéc City skyline. It was built over 100 years ago as a luxury stopover for railway passengers, it was never actually a real castle. We did not stay here, we’re budget travelers but we did go to the bar for drinks. They welcome anyone into the hotel and there is quite a lot of history to explore and read about on the property.

Right below the Fairmont Le Chateau Frontenac is the wide boardwalk Terrace Dufferin. The Dufferin Terrace is a 200 year old wooden promenade connecting to the historic Citadelle, a huge star-shaped fort, and runs alongside the Château Frontenac. This is a great place to go for a walk along the St Lawrence River and a perfect place for people watching. Super popular in the winter and for Carnival, you can rent a tobbogan and go down one of the icy slides at close to 40 mph. It’s one of the oldest attractions in the city, dating back to 1884. I can’t wait to visit in the winter so we can zippy zoom down that!

This street along with the whole Petit Champlain neighborhood, is the most picturesque part of Québéc City, it was actually voted Canada’s prettiest street in 2014. The charm of this 200 year old street is undeniable. There are many little boutiques, galleries and cafes on both sides. This street felt like a street we had walked many times in France.

As much as we love to walk sometimes it’s nice to take a break and enjoy the view from the funicular. From Lower Town, you can climb the “Breakneck Stairs” up to Dufferin Terrace and Upper Town or you can take the funicular. The funicular links the Quartier Petit-Champlain to the Château Frontenac.  In operation since 1879, it offers a wonderful view of the neighborhood and the St. Lawrence River, as you ascend to Dufferin Terrace.

Walk the Fortifications and check out the Citadelle

Québéc City is the only remaining fortified city in North America north of Mexico, with close to 3 miles of walls and gates to explore. The fortifications, themselves, are considered to be a national historic site.

The star-shaped Citadelle de Québec, is a massive fortress built mainly by the British to defend the city against an American invasion.  It’s been called the “Gibralter of the Americas.”  Today, it’s the base for Canada’s Royal 22s, known as the Van Doos. Behind the Citadelle, take a walk through the Plains of Abraham, the historic battlefield where British forces invaded and defeated the French in 1759.  The park also hosts festivals and other events, while we were there they were hosting a 5k.

Place Royale is a beautiful square at the site where Samuel de Champlain built a fort and trading post after his arrival in 1608, the first permanent French settlement in North America.  The square is also home to Notre-Dame-des-Victoires, the oldest stone church in North America, built in 1688. It’s a beautiful square and it was festively decorated when we were there last fall. Great place to people watch, take photos and think about what life must have been like way back when.

You can’t miss the huge “Fresque des Québécois” located right near the Place Royale. It’s the largest wall mural in the city. The colorful, intricately painted mural recounts the history and heritage of the City.  In the windows of the painted building, you’ll see historic figures and nearly a dozen of Québéc’s leading writers and artists.

We ate at quite a few yummy places while in Old Quebec City. We tried to sample as much of the local cuisine as we could. You must get poutine, probably the most famous Québécois food, poutine consists of fries, gravy and cheese curds, in Québécois slang it means mess. I don’t care what it looks like it’s delicious . Tourtière is a traditional meat pie, usually filled with seasoned and minced beef or pork, or game meats. Can you get a better comfort food then warm meat wrapped in a pastry crust? I really don’t think so.  Andrew makes a Tourtière every year for Christmas morning so of course he needed to try the traditional dish. Aux Anciens Canadiens serves up traditional Québécois recipes and is a must stop. Other traditional dishes you should try while visiting are soupe aux pois (pea soup), pouding chômeur (white cake with maple syrup), crepes of course, and alllll the pastries. We get pizza everywhere we travel, it’s our weird thing.

Whenever we travel we love to try new dishes and sample the local drinks. When we first arrived in Old Quebec we dropped off our bags in our room and went right out to explore. We stumbled across this cute bar Pub L’Oncle Antoine, a 17th-century brick cellar turned intimate tavern with super nice wait staff and great beers. We also hung out one night at Pape Georges where there was live music and great beer and wine. We know that we stayed in a “touristy” area but the places we went had a local feel

We really enjoyed our visit to Vieux-Québec and can’t wait to explore more of Canada when it’s safe to do so. Until then we’ll just try to recreate the food at home and look through old photos when we get that travel itch.

Subscribe to Blog via Email
Instagram
Happy Friday and first day of July! This week's finds include some mocktails, a cookout favorite, and some Stranger Things. (They better not kill Steve!) 🔗 in profile!⁣⁣⁣
Views 😍⁣
New post! ✨ Thinking about taking a trip to Portland, Maine? I know how overwhelming it can be to find just the right place to stay when planning your trip. Check out some places that I would and have stayed at! ⁣
The early bird catches the sunrise 🌅 ⁣
The way life should be 😍⁣
Happy first Friday of summer! 😎 This week’s finds include a strawberry recipe, a refreshing cocktail, a summer read and road trip inspo. 🔗 in profile!⁣⁣