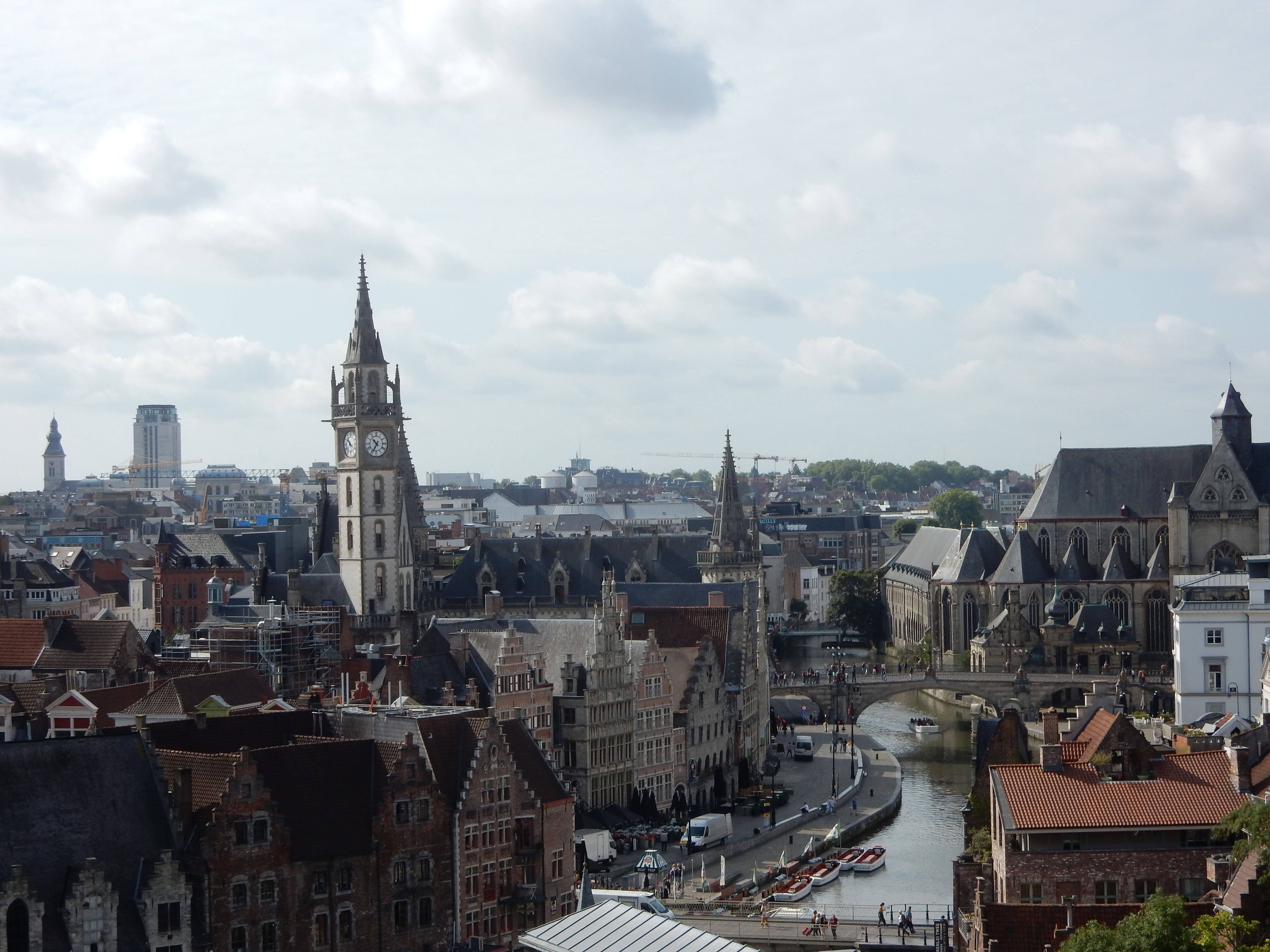 My goodness we love Belgium! We’ve visited this country 4 times in the past year, if you really think about it that’s quite excessive but the food and people are so great.

So where did we visit for trip number 4? We visited Ghent and of course Brussels for a few days.  Ghent is a not so touristy city at the confluence of the Leie and Scheldt rivers.  It’s full of great medieval architecture, cobbled streets and excellent food. Don’t try to compare Ghent to another Belgian city with medieval buildings and winding canals though, they’re a bit touchy on the subject.

Ghent is known for its medieval architecture, the most famous being the Gravensteen Castle. The 12th-century Castle of the Counts is impossible to miss, with its moat and turrets, the imposing structure looms over the Leie River.  It’s kind of spooky looking at night .

Back in the 12th century, punishment could only be delivered after a confession, and that’s where the Gravensteen was needed…..torture central. Now it contains a museum of “judicial objects” including a rack, a leg-hold trap and thumbscrew, plus a collection of weaponry. The gatehouse, ramparts, keep, and stables are open to visitors and the view from the top of the castle is really nice.

Take a Walk Down Werregarenstraat

Known as “graffiti alley” the pedestrian street in the center of Ghent started during the Ghent Festivities in 1995, the project is never the same from one week to the next, with new tags and designs appearing all the time. Every now and then the alley is painted over to give the artists a blank canvas but soon the kaleidoscope of colors reappear.

There is just something extra tasty about Belgian french fries. They are perfectly golden and crisp while still being soft and potatoey on the inside. We stopped into the Frites Atelier for lunch and it did not disappoint. I had the Flemish beef stew and Andrew had a burger and frites. I loved the Flemish stew so much that we tried to replicate it later. Still working on perfecting that.

Vrijdag Markt is a beautiful square in the historic center of the city, very close to the charming neighborhood of Patershol. We ate at several restaurants in the area and one of my favorites served Mexican food…yep Mexican food in Belgium.  We were curious what Mexican food would be like in Europe, we eat so much of it back in the States, the tacos that we ordered were delicious and they even had Micheladas on the beverage menu.  It was the perfect dinner after having some local beers down the street.

When you’re in Belgium you know that you’re going to probably have a beer or two. We popped into De Dulle Griet  one afternoon, it boasted having more than 500 beers, so we needed to check it out. It was filled with locals and visitors alike, we ended up chatting with some young ladies from Spain. We also went to Het Waterhuis ann de Bierkant and had a beer outside overlooking the river Leie. It was here that we learned about the “fued” of sorts between people who live in Ghent and people who live in Bruges. From what we gathered people from Ghent see their city as more real, authentic and less catered to tourists than Bruges. And while I can say that Ghent was not overrun with people while we were there, I am not picking sides.

We stayed at the Ghent River Hotel a very short walk from Vrijdag Markt. It was the perfect hotel for us, within walking distance to everything we needed and the price was right. When we arrived though, they didn’t have any hot water. There was some sort of issue and it being Sunday the plumber wouldn’t be there until the following day. They have a sauna in the hotel and offered us use of that complimentary for the inconvenience. Andrew, being Finnish, was all about the sauna and we made great use of it while we were there.

We haven’t come across a city in Belgium that we haven’t fallen in love with and Ghent was no exception. Now, where to next?